It’s almost too amazing to be true. The name “EURion constellation” was coined by Markus Kuhn, who uncovered the pattern in early 2002 while experimenting with a Xerox colour photocopier that refuses to reproduce banknotes. The word is a blend of Orion, a constellation of similar shape, and EUR, the euro’s ISO 4217 designation.

The EURion constellation first described by Kuhn consists of a pattern of five small yellow, green or orange circles, which is repeated across areas of the banknote at different orientations. The mere presence of five of these circles on a page is sufficient for some colour photocopiers to refuse processing. Andrew Steer later noted simple integer ratios between the squared distances of nearby circles, which gives further clues as to how the pattern is meant to be detected efficiently by image-processing software.

Somebody else being dealt with by Jimmy in a superb manner.

Today I heckled Jimmy Carr. He even called it a “Good Heckle”, before pointing out that “…the reason she didn’t enjoy it was because she’s dead.”

I guess you had to be there. 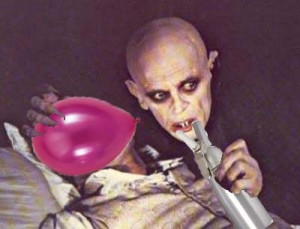